Fairy garden store owner Courtney Kelly has a secret: she can actually see fairies and is in the process of helping her own, Fiona, earn wings by doing fair and just things. So when Fiona urges Courtney to swallow a couple of quarrelsome ladies down in the courtyard outside her shop, Courtney knows it’s best – even though it earns her the enmity of one of the women, the hyper-competitive art critic Lana Lamar. The other woman is Wanda Brownie, gallery owner and mother of Courtney’s best friend, Meaghan. Lana and Wanda had come to public battle over not only what Wanda considered unfair criticism of one of her artists, but also Lana’s insistence on getting the rules bent for her in the sports club they are both heavily involved in.

So when Lana is found dead at an art auction a few nights later with Wanda clinging to the letter opener, thrown into Lana’s chest, it’s no surprise that Wanda is quickly charged with murder. It does not help Wanda’s case that she can remember nothing between when she went to take a nap in the ladies’ room and when she was gently awakened by her sleepy fugue after Courtney witnessed the gloomy tableau. Even worse, Wanda had clearly said “What have I done?” to those who saw her lean over Lana’s body.

Courtney and Meaghan know that Wanda would never kill anyone while they were ready or otherwise, so they are determined to clear her name. Fiona is obviously eager to help, both in this case and in other cases where her special abilities and connections can do the most good. But will Courtney need more help than even a fairy can provide when a ruthless killer decides to permanently prevent her from finding out the truth?

The paranormal aspect of this culinary cozy mystery is an absolute delight as Courtney and Fiona set out to uncover a killer in their otherwise charming California hometown of Carmel-by-the-Sea. The Mystery Plot is solidly built, but perhaps my favorite part of the book was the continuation of a subplot from the series debut, where Courtney and Fiona do their best to reunite a mother and daughter who are divorced after the latter ran away to join a cult. Tips and tricks woven into the narrative of building your own fehave were also downright inspiring and definitely get me closer and closer to building my own!

There were 13 recipes included here with gluten-free alternatives to many of the baked goods. Daryl Wood Gerber has an exquisite palate, so I knew I could not go wrong with any of these dishes. In the end, I chose to try the following:

1 14-ounce can artichoke hearts, in water, drained and diced

Saute green onions and artichoke hearts in oil for approx. 3 minutes on medium until green onions are tender. Cool and set aside.

Pour the mixture into the prepared 8-inch square pan. Bake for 35-40 minutes.

For side dish, cut into 2 to 3 inch square portions. 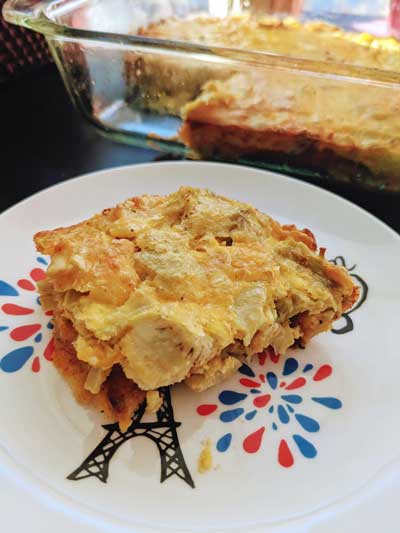 I freely admit that the main reason I chose this dish – the pulling of delicious artichokes aside – was to use some of the extra green onions and eggs in my fridge. This is a good recipe for it, especially because the end result is so delicious, whether served hot or cold (but if I was forced to decide, I would probably fill the hot version). My husband brought water biscuits home from the grocery store instead of soda, but I don’t think it changed the taste much. Water biscuits tend to be a little less salty than sodas, but it worked fine for my household. I also used a chili-garlic sauce instead of Tabasco and think you could probably get away with using any hot sauce of your choice. Either way this was a very delicious dish that works nicely as a light meal and holds up really well when you don’t feel like doing much more than microwave yourself a snack or a little more.

Next week we go into the country to try out another blissful side while we investigate the suspicious death of a hiker. Join me!

Learn more or order a copy