Lee Barrett has just been promoted from field reporter to program director at WICH-TV, and she must admit that she does not really miss her old position. Chasing stories was fun, but stressful – and occasionally dangerous. Being a director with her own office allows her to be both more confident and more creative, even though she has a whole new set of issues to tackle as she formulates a new weekly children’s show for the station. As her reporter colleagues set out to cover the story of a John Doe washed ashore, she wishes them good luck and happily returns to work out sets. Little does she know that she will soon be involved in that story up to the eyeballs anyway, all because of a seemingly harmless good deed.

As she walks the few blocks from the TV station to the home, which she shares with her beloved aunt Ibby, she sees an abandoned woman who appears to have been sitting on the same bench on plain all day. Lee examines her and discovers that the woman, who looks worse after wear and tear, has almost completely lost her memory and does not even know what her own name is. Lee compassionately invites Jane Doe to her home for a meal and a chance to refresh herself. Jane is understandably reluctant to go out with a stranger, but Lee assures Jane that her boyfriend, Pete Mondello, is a police detective who wants to swing by and help them fix things.

And that’s exactly what they do, not only with Pete’s professional assistance, but also with the help of the supernatural visions that occasionally force themselves into Lee’s attention. Turns out Jane may have been a witness to John Doe’s death, though Pete to Lee’s anger will not rule out the idea that Jane was more than just a witness. Lee and Aunt Ibby have both developed a soft spot for Jane, but will their trust prove misplaced? Worse, will their kindness appreciate them for being a dangerous killer who will not hesitate to demand more victims?

This was the first book I read about the Witch City Mystery series, despite it being the 11th installment, but I had absolutely no trouble getting things started with Lee as she and her friends and family is held together to solve a gruesome crime. Carol J. Perry’s prose is delightfully immersive, and almost all of her characters feel fully invented. I admit that I did not really understand why the killer’s ongoing witness intimidation was so shameless, but there are certain types of criminals that not even I, with my large, if most used experience of them, can understand. Either way, this was a fun and extremely readable paranormal mystery.

There were seven delicious recipes included and I decided to try this one:

1 4-ounce can of mushrooms, drained

Saute bacon and onions in three tablespoons of butter until onions are tender. Add eggs and cook until set, stirring occasionally to encrypt. Fold in mushrooms and cheese sauce.

Spoon the egg mixture into a lightly greased 12x7x2-inch baking sheet. Top with breadcrumbs and sprinkle with paprika. Bake at 350 ° F for 30 minutes.

Can be cooked forward and cooled until it is time to bake. 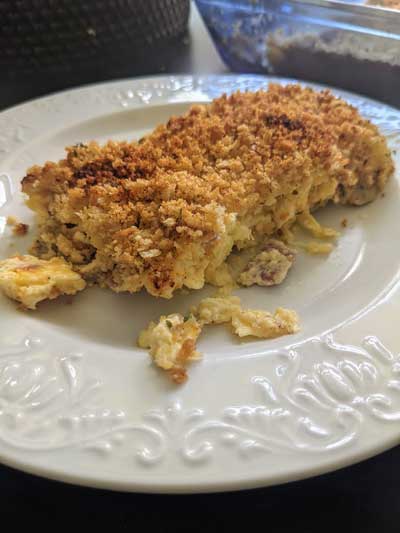 This was so good that I had seconds of it for two meals in a row, which set off in my usually quite mild case of lactose intolerance, but it was all worth it. I made a few adjustments using turkey bacon instead of Canadian and cheddar cheese instead of American, while I threw twice as much mushrooms because I like mushrooms, but I don’t think my changes changed the flavor profile much. I also sautéed my own bread crumbs in butter over medium heat, melted 2 tablespoons of butter first and then added 1 ½ half cup of crumbs and toasted until they became a nice golden brown, stirring occasionally for even browning. All in all, the stew was extremely delicious, both the day and the day after. It is a good and not too difficult dish to impress with, especially at a group brunch.

Next week, we continue our roll of egg-based dishes while we investigate another murder with paranormal help. Join me!

Learn more or order a copy